Reading Linux partitions has never been so easy 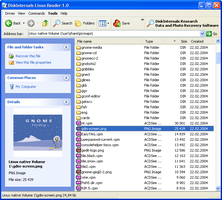 Advertisement
Do you have a Linux partition on your operating system? If so, you probably want direct access from Windows, but you think it is impossible.

Linux Reader is a totally free app for Windows that lets you access a Linux partition as if it were any other Windows compatible disk.

It's to the creator's credit that, as it is not possible to make Windows explorer show Linux partitions, they have created their own version to simulate a full intergration with your system.

The disk drives used on each type of operating system use different file systems. While Windows usually runs on the popular FAT32 or NTFS systems, on Linux the standard is the EXT4 and its predecessors, while Apple has opted in recent years for the HFS+ and its derivatives. The ability to work with units in different formats is not bi-directional, and by default Windows doesn’t allow you to explore drives used by other operating systems, although there are free tools out there that will let you do it.
See more

I just switched to ubuntu and I couldn't read my linux files from my windows xp and with this program now my linux partitions are like any other windows.

Rufus
Create a bootable USB for DOS
Unlocker
Delete files even if they are in use, protected or blocked
Teracopy
Transfer your files with total security
CrystalDiskInfo
Control your Hard Disk state
Recuva
Recover any file you've accidentally erased
MediaFire Desktop
Store, download, and share files on the cloud, all from your desktop
Rufus Portable
Convert your pen drive into a bootable USB drive
USB Image Tool
Create and manage USB drive images
Advertisement